Diabetes is often associated with loss of insulin-producing beta cells that reside in the pancreas. The Parsons lab is interested in learning how to make replacement beta cells. The zebrafish is a particularly valuable animal model that can regenerate beta  cells as required. Accordingly, the Parsons lab researches the mechanisms that control β regeneration in zebrafish. In previous work, the Parsons lab successfully mapped the cellular response to beta-cell loss and identified the cells that participate in replacing lost beta cells. These potential progenitors are also abundant in human pancreas.

Recently, the Parsons lab showed that partial loss of a protein called Sox9b leads to accelerated beta-cell regeneration in zebrafish – an observation that points to the mechanism behind beta-cell production. Funding from the National Institutes of Health (R01 renewal) was awarded to further investigate the molecular mechanisms used by pancreatic progenitors and stem cells to replace lost beta cells. Particular emphasis will be made on the function of Sox9b and the genes that interact with this protein. Using a unique collection of tools, including transgenic and mutant zebrafish, the Parsons lab aims to identify new targets and pathways that ultimately can be exploited to induce the production of insulin-producing cells and treat diabetes. 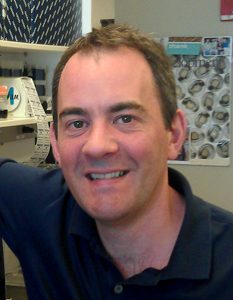 Congratulations to Yinyin Zhuang for receiving an NSF-Simons Fellowship