Several years ago when California started its’ great experiment in public funding of science and created the California Institute of Medicine, one of the first grants it awarded were training grants. At UCI, Developmental and Cell Biology Professor Peter Bryant, was awarded a grant to train graduate students and postdoctoral fellows in stem cell biology and regenerative medicine. CIRM’s goals were to train the next generation of scientists in this rapidly emerging field and to develop a diverse workforce across a wide range of disciplines. Together with School of Medicine colleagues, Dr. Ping Wang and Dr. Sid Golub, Bryant developed at UCI a training program designed to address the basic science of stem cells, clinical application of the cells and the ethical, legal and social Implications of Stem Cell Research. When a few years later Bryant handed the reigns of the training program to colleague, Dr. Peter Donovan, the program expanded to train more grad students and postdocs and to add clinical fellows. Now some 11 years after the award of that first grant we can now see the result of all those efforts. Recently former UCI postdoctoral fellow and a trainee on that grant, Dr. Kristine Freude, visited UCI to present her most recent work. Freude, a former postdoctoral fellow in the labs of Maike Sander and Frank LaFerla, visited from Copenhagen where she is now an Associate Professor in the Group of Stem Cells and Embryology at the Institute of Clinical Veterinary and Animal Sciences of the University of Copenhagen. She described work on using stem cells from patients to study fronto-temporal dementia. Following the talk there was a small reunion of training grant alums including Freude and our own Matthew Blurton-Jones and Munjal Acharya. Blurton-jones and Acharya were also trainees on the CIRM training grant and have gone on to achieve great success. Acharya is Assistant Professor In Residence in the Department of Radiation Oncology in the School of Medicine while Blurton-Jones was recently promoted to the rank of Associate Professor in the School of Biological Sciences. Each have established rigorous stem cell research programs thanks in part to the opportunity they had through the CIRM training grant. Acharya focuses on developing new treatments for “chemobrain”, the effect caused by treating cancer patients with irradiation or chemotherapy while Blurton-Jones focuses his attention on Alzheimer’s disease and other types of dementia. Some have argued that the training programs were amongst the most successful grant programs developed by CIRM. Certainly the program at UCI has provided strong evidence to support that idea. The seeds planted here certainly seems to be growing well. Like the giant redwoods growing elsewhere on the campus it seems likely that the grand experiment started at UCI will last a long, long time. 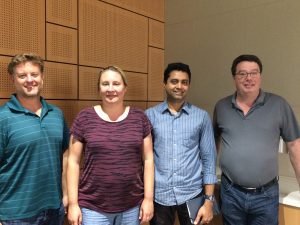 Congratulations to Dr. Star Lee on receiving the GAANN grant.

Dr. Pablo Lara-Gonzalez was a speaker at the 2022 C. Elegans Development, Cell Biology and Gene Expression