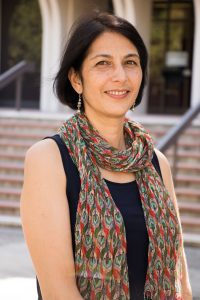 Drosophila development – My lab uses the fruit fly Drosophila as a model system to investigate the roles of TGF-ß ligands both during embryonic development and metamorphosis, as well as in adult life. Our particular focus is on the molecular mechanisms underlying the diverse cellular responses triggered by TGF-ß ligands. Another interest is coordination and integration of inputs from multiple signaling pathways. While our earlier work focused on the BMP signaling pathway and its involvement in embryonic patterning and cell fate specification, our current emphasis has shifted to dissecting the activin pathway. Unlike BMPs, Drosophila activins are expressed in differentiated cells at later stages of development, for e.g., in the nervous system, muscle, and adipose tissue. Over the last few years we have uncovered roles for activin signaling in several aspects of nervous system development and function, such as axonal pathfinding and synaptogenesis. Our current research on activin signaling is centered on two aspects: understanding how activin signaling regulates developmental timing through interactions with the steroid hormone pathway, and how activin signaling influences carbohydrate and lipid metabolism providing a key regulatory input into energy homeostasis. In parallel we have continued to work on several aspects of BMP signal-transduction. Our previous work on Schnurri, a BMP specific Smad-cofactor, led to the identification of a consensus sequence that mediates BMP-dependent repression in flies. We are using a bioinformatics approach that incorporates evolutionary constraints inferred from comparisons across 12 Drosophila genomes to identify potential novel BMP target genes containing such enhancers, that are repressed by signaling, thus less amenable to identification through conventional approaches.